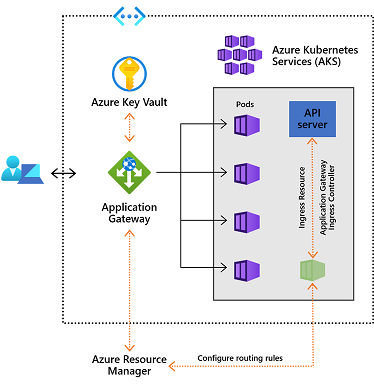 The previous part 1 blog post went over fundamental concepts of ingress and ingress controller. This part 2 post will build on this concept and give a review of the App Gateway Ingress Controller (AGIC)

First of all, what happens when you deploy AKS with its default settings?

The default AKS deployment when going through the Azure Portal has network related configuration set with HTTP application routing as disabled.

Http Application Routing add-on makes it really easy to setup an ingress controller so that you can access your deployed apps in AKS. However, it is not recommended for production deployments.

Essentially, there is no real ingress controller set up upon default AKS deployment. So you have to install an ingress controller. A popular approach is with NGINX (i.e. in the cluster), you can read about it in Create an ingress controller in Azure Kubernetes Service (AKS). This will work with a public Azure Load Balancer (that is automatically deployed with AKS) to support ingress traffic outside of the AKS Virtual Network. Not that a Public IP that is also configured for this load balancer’s front end listener, by default. Note that there is the ability to setup an internal Azure Load Balancer for internal private traffic scenarios.

For a more sophisticated option, you can use the Azure Application Gateway (with Web Application Firewall feature). The most notable features are

For me, the web application firewall is very useful for detecting or preventing web attacks as it leverages the OWASP ModeSecurity Core Rule Set. For example, protect from cross site scripting and SQL injection attacks onto your web applications.

I later learned that the AG Ingress Controller works only with the App Gateway pricing tier of Standard_v2 and WAF_v2 SKUs. This means you can’t use the cheaper and older App Gateway Standard and WAF tiers. I believe where technical requirements are sufficient for the older WAF tiers, it would be a much cheaper option. But I anticipate those older pricing tiers would perhaps be deprecated anyways. This is just a guess.

The Application Gateway Ingress Controller can achieve up to 50 percent lower network latency than in-cluster ingress controllers. You can read further about it here.

You can share the App Gateway with other Azure resources such as a VM and/or Azure App Service. Therefore, making it more cost effective as it is being shared.

My Review, Opinions and Tips from Experience

For Dev/UT environments, I usually turn off the App Gateway to save on costs as it is an expensive service. The only way to do this is at the moment is through Azure PowerShell.

Note that the running AGIC container will notice that the App Gateway is off and will eventually turn it back on. I believe this is by design for resiliency. So what I normally do is shut down the node pool VMs and then run the PowerShell cmds to turn off the App Gateway.

Use the App Gateway to leverage the Layer 7 features and share them across multiple AKS clusters and even other Azure services such as Azure Web Apps and VMs.

My hope is that I have been able to explain the roles and relationships between the ingress, ingress controller and how the App Gateway is a sophisticated approach to support the ingress traffic into the AKS cluster to access the hosted applications. This is something that has been a challenge to wrap my head around and hope to make it a smoother learning curve for you.