I used the following article as my primary source:
Plan for SQL Server AlwaysOn and Microsoft Azure for SharePoint Server 2013 Disaster Recovery

I tried my best to follow all the steps, but I approached them in a different order per my own DR design.

As a result, the following link are my raw notes and screen shots of some of my detailed steps in building the disaster recovery farm.
https://onedrive.live.com/redir?resid=D50B33B813A3693B!13901&authkey=!ANaDqU9cBkj36s0&ithint=file%2cdocx

My naming conventions are not perfectly consistent since I was building on the go. With these notes, it is my hope you can come away with some steps to a working solution.

The following is a summary of key steps in building my disaster recovery lab in Azure. 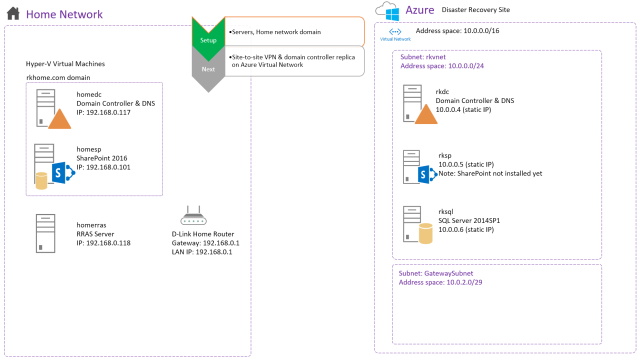 My personal home network consists of a set of Hyper-V virtual machines with the physical host as a Windows 10 desktop PC. The specifications are Intel Core i5 4 processors, 16 GB RAM, Intel solid-state drive for the virtual machine disks, and D-Link DIR-826L router.

Note: At least set this server as a static IP rather than dynamic IP in the Azure portal. 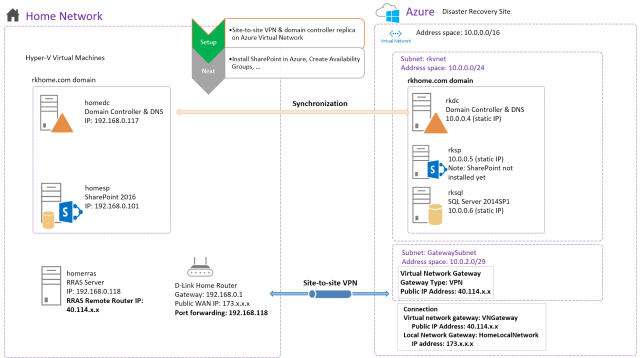 Enable cross network connectivity between the on-premises home network and the Azure virtual network. The other option is using ExpressRoute, which is more suited for production scenarios for its private connection, higher bandwidth, better performance and reliability.

Port forwarding configured in the D-link home router to allow internet connectivity to the homerras server for a VPN connection.

Serves as the cross-premises gateway connecting your workloads in the Azure Virtual Network to on-premises sites. This gateway has a public IP address accessible from the internet.

Enables interaction with on-premises VPN devices represented in the Gateway Manager. Therefore, needs to be configured with the home router’s public WAN IP address. The port forwarding setup always communicates to the RRAS server as the VPN device.

Configuration of an interface named as “Remote Router” to have the public IP address 40.114.x.x for the virtual network gateway.

Any added DNS records and AD accounts will be synchronized between the two domain controllers.

In testing the VPN connection, any machine connected to the on-premises network was able to ping or RDP, with a domain account, into any other server in the Azure virtual network and vice versa. 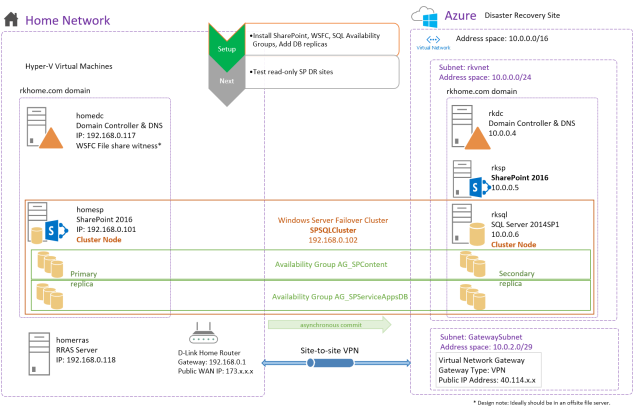 Installed on Azure rksp virtual machine as a single-server farm with mysites host and portal site collection. SharePoint 2016 is already installed on the on-premises farm before the start of this lab.

Installed Windows Server Failover Cluster feature on homesp and rksql as they are database server roles.

File share cluster quorom is hosted on homedc. This quorom should be on a dedicated file server, but do not have enough memory resources for another VM.

Enabled SQL AlwaysOn and asynchronous commit configuration. This is recommended  for higher network latency due to the VPN connection and geographic distance between the two sites. Synchronous commit is recommended for network latency of <1ms for SharePoint. When I ping servers across the two environments (Toronto and North Central US), I get an average of about 75ms ranging from 30ms to 110ms.

The below databases below were deleted in rksql secondary before replication from homesp primary database instance.

Configuration databases are farm specific. Search databases can be updated with a full crawl upon failover. 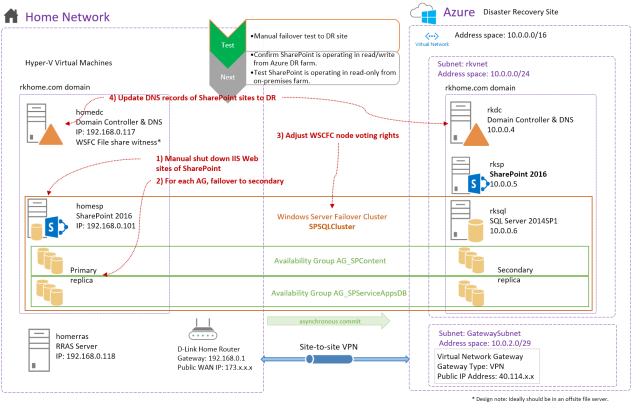 This can be repeated to failover once again to the on-premises site making it the primary once again.

I approximate the cost of running the above resources to be $130CAD/month, if the SP VMs are stopped per cold standby methods.

This has been a great learning experience as I understand how all the little pieces work together. Out in the enterprise world, disaster recovery tends to be lower in priority in a project roadmap or not at all. However, as the business criticality of a technology solution increases, so is the need for a DR solution. Hosting in Azure is a cost effective option since you are actually paying for what you use, especially in cold standby scenarios. Leveraging Azure regions in geographically remote areas are appropriate for mitigating widespread disaster situations such as hurricanes, mass power outages, earthquakes, floods or even outbreaks that can affect a data centre’s operability.

In technology, something’s you do not really know until you build it with your own hands – learning is by doing.