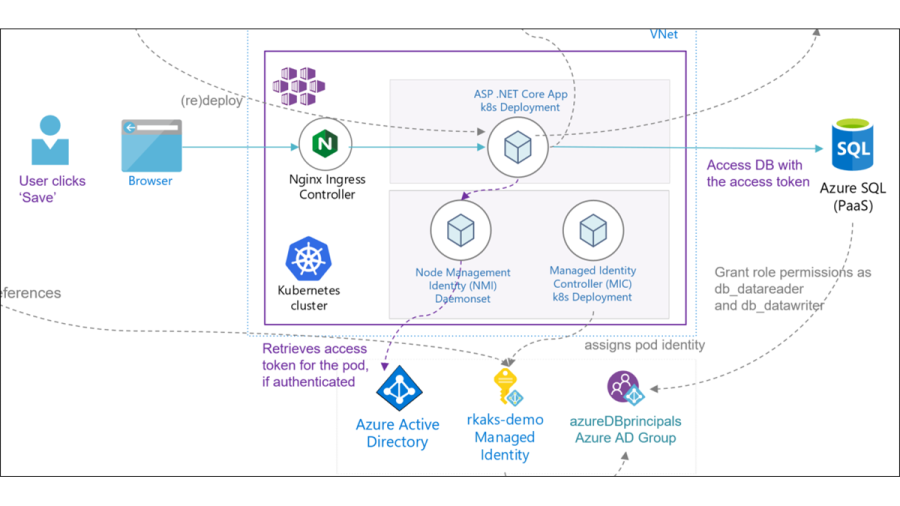 The benefit is the ability for the application code not to use conventional SQL credentials of username and password stored in configuration files. Also, not use Azure Key vault to retrieve any user name and password credentials. There is nothing wrong with these techniques, but using Managed Identity is more streamlined and is a security best practice.

This blog article will show a comprehensive architecture, flow and interdependencies of my demo implementation. This demo is based on the articles, sample code and tutorials below in the References section.

The Managed Identity Controller (MIC) is a Kubernetes custom resource that watches for changes to pods, AzureIdentity and AzureIdentityBindings through the Kubernetes API server.

The Node Management Identity (NMI) server is a pod that runs as a DaemonSet on each node and listens for pod requests to Azure services.
NMI server then requests an access token from Azure Active Directory (AAD) based on the pod’s identity mapping. This process can involve querying the Managed Identity Controller (MIC).

The MIC checks for Azure identity mappings that correspond to a pod.

This access token can be used by the pod (or the .Net Core application) to then request access to Azure SQL Database.

Here is the baseline architecture. There is no authenticated access to Azure SQL yet. Note that the NMI and MIC has been deployed as custom Kubernetes resources to support Pod identity configuration.

Update the ASP .NET Core app’s connection string, add the Microsoft.Azure.Services.AppAuthentication Nuget package and update Entity Framework code to be able to connect to the database

Note the database connection string does not need any set of credentials and as such provides the benefit of not storing and handling per dev, test, prod environment. This is they benefit. The management of access is left to the administrator of Azure AD and specific Azure resources (e.g. Azure SQL DB).

Here is the code snippet in the DBContext.cs to enable the database connection for the application:

In my design, I have granted access to the Managed Identity rkaks-demo via an Azure AD Group named azureDBprincipals. The alternative is to directly grant permission to the managed identity. The choice is a matter of preference and access security design.

Read for further details at Grant permissions to managed identity

4. Runtime execution of the application accessing and saving data against the Azure SQL database.

Finally, the pod can establish a SQL connection and access the Azure SQL database with the provided access token. The end user will see the data saved in their To Do list.

There are many interdependencies at build time, deployment time and run-time and so make sure to understand all the relationships and flows. With the ability of leveraging Azure AD authentication to manage access between applications and Azure services, we establish and design that does not need credentials stored in build and deployment time via configuration files. This reduces security risks and exposure.